The Land of Pink Sand

Recently I was invited to be a part of an all Women’s Pro-Am on the beautiful island of Bermuda. This tournament was the 20th Annual Bermuda Ladies Pro-Am Golf Classic that consisted of 20 teams of all women. We played at the Port Royal Golf Club and stayed at the Pompano Beach Resort.

This year was the first year I have ever traveled outside of the United States to play in a golf tournament and I have gotten to do it twice. Both times I have been blessed with the opportunity to go to a tropical island, something I did not think I would have the opportunity to do in my lifetime.

Around this time last year I was asked by one of the female members of the club I work at if I would be her pro for a Pro-Am they would be playing in the following year. After I heard where the tournament was taking place I really couldn’t find a reason not to go. 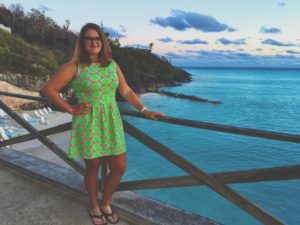 After a short flight from TPA to ATL I met up with the other ladies on my team in the airport for our connecting flight to Bermuda to kick off our week in paradise. As we are all sitting on the plane ready to push back our pilot comes over the loud speaker and says that we are just slightly delayed due to some last minute cargo that was added onto the plane.  At this moment I decided to look out of the window (I was sitting over the door to the cargo hull) and see what it was they were loading. This was when I noticed a luggage trailer that had quite a few sets of golf clubs sitting off to the plane; I thought to myself that maybe they took them off of the previous flight to be loaded onto another. But if I had really been paying attention I would have thought about how I had gotten into ATL at 7:30 am and was sitting at the gate for three hours before take off and our plane had been there through the night waiting for us to board that morning. But naturally I was too preoccupied with the thought of getting to go play golf on a tropical island to realize what was going on.

We land in Bermuda go to the baggage claim area and notice there are a lot of confused faces from many of the ladies who were on our flight. There was a Delta attendant waiting for us when we got off the plane with a list of names whose clubs did not make it to Bermuda. You totally saw that one coming didn’t you ;). When I say there were A LOT of confused faces I really mean it…. over 25 sets of clubs were missing on our flight from ATL. About half of the field of the tournament was on our flight and a third of the field didn’t have clubs. Of all the ladies on my team I was one only one to receive clubs. But don’t you worry Delta didn’t only leave clubs behind, there were ladies with out suitcases, but got their clubs and there were also ladies who had nothing upon arrival! 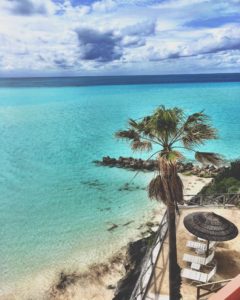 As a very large group of agitated women tried to figure out why their clubs and luggage were left behind, the poor Delta agent dealing with all of us knew exactly whose clubs were left behind. We soon learned they actually went into the plane and took those peoples luggage off the plane after it had already been loaded to make room for the cargo that they had added onto our flight. All of the ladies missing bags had received email confirmation that all of their bags had in fact been loaded onto the plane. So remember the bags I saw off to the side of our plane that I was perplexed about…yep those were all of our bags they had taken off the plane to make room for extra cargo. (*insert eye-roll)

So needless to say our wonderful trip to paradise had started off with a bang! Luckily we had an off day for to our selves built into the event and they were able to push back the tournament a day and let our first day there, be our off day. Everyone’s clubs and luggage weas delivered before tee off of the first round of the event and from there on it was smooth sailing.

The format of the event was 2 best balls of 4 players for three days, both net and gross.  There was an extra day for fun play for the amateurs and later in the morning on that same day all the pros played against each other. The first two days of play were team play and then the third day was the Am fun day and pro event and the 4th and last day of play we finished the 3rd round of team play.

The week of golf I experience was unlike anything I had every played in before. This time of year it is a bit chilly and very windy in Bermuda. The only thing close to the conditions we played in were when I played in a college golf tournament in North Carolina during Hurricane Sandy.

I learned that when wind is sustained at 37 mph and gusting over 50 mph, “down wind” is a concept that no longer exists.  If you have never played in wind like this you have never had to hit more club down wind because it actually blows the ball straight towards the ground resulting in the need to hit more club. Now into the wind the ball reacted accordingly, but as you know it is a guessing game as to what club to hit when dealing with the wind, its not quite an exact science. I will say proudly I had 110 yards into a green and had to hit my 5 iron which goes 175 and let me tell you it was the best 5 iron I have ever hit, sticking it to 2 feet. Throughout the week I watched balls get blown off of tees, balls were moved by the wind from a 3 foot putt to almost off the green to a 12 foot putt, you could play at least 30 to 40 yards of movement left and right when hitting into a cross wind.  It was both a challenging week of golf and a week where I learned a lot, more than I ever anticipated.

The group of ladies I went with on this trip could not have been more fun. There was plenty of laughter while playing throughout the week. One particular instance that left our bellies aching from laughter was when we witnessed a shot go backwards 15 feet into the air over hedges and a road. If you can picture this, one of my team members hit their ball over the green, which left her ball lying between the edge of the cart path and hedges standing at about 15 feet tall that were lining the road. Well my team member makes a heroic attempt to hit the ball and as it comes off the club face it catches the corner of the cart path and shoots straight up over her head, the hedges and across the street onto the next hole. As we start laughing uncontrollably, she is hunched down waiting for the ball to come back down and hit her in the head shouting, “where is it!”

Not every day was full of wind, cold weather and hilarious golf shots. We did have a day that was absolutely beautiful!  The sun cam out after we played golf in the morning and we had maximum wind of about 5 mph which was a perfect day for golf and the beach.  The sun was shining, water cold and as clear as a freshly cleaned window. For those of us that felt a little adventurous, we decided to dip more than just our toes in the water and were able to walk almost 50 yards out into water almost to the channel buoy.  After your body went numb from being in the water, the warmth of the sun beaming on your skin felt like heaven. It was the afternoon we had all hoped for while on the trip but due to the weather forecast we weren’t sure if we were going to get. That afternoon was the first time I saw a parrot fish in person and they are a lot larger than I expected them to be but as colorful as every photo I have ever seen! 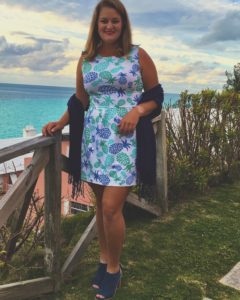 With a week full of golf, Goslings rum swizzles, beautiful sunsets and laughter for days it was a trip I will always remember and strive to repeat.  As cliché as it sounds, I cannot wait until next year!

Thank you for reading and I hope you enjoy following my journey through my blogs and photography. Check back in in a few weeks to see how my next event goes!